Section 4 has provided a strategic, settlement and neighbourhood level context for the site and has identified a number of factors that must be considered when masterplanning the site and further factors to be considered in the detailed designing of development. Building on that analysis this section will identify site level constraints and opportunities and specifically consider topography, views and landscape features and existing access and connectivity.

In particular, development proposals should seek to:

The site benefits from significant tree screening along the eastern edge of Glasshouse Lane to the west and to the northern side of Leamington Road to the south of the site. Furthermore, a green corridor runs along the eastern side of the site immediately to the west of the A46. Glasshouse Wood and Thickthorn Wood extend into the site and Glasshouse Spinney provides a connection between the two which also extends to the western boundary of the site. Existing field boundary hedgerows, mature trees, ornamental planting and an orchard offer further greenery to the site.

Views into the site are generally limited and within the site woodland and hedgerows limit long distance north-south views through the site. The most notable building within the site owing to its centrally located position is the Edwardian mansion Woodside Hotel and Conference Centre which is to be retained. 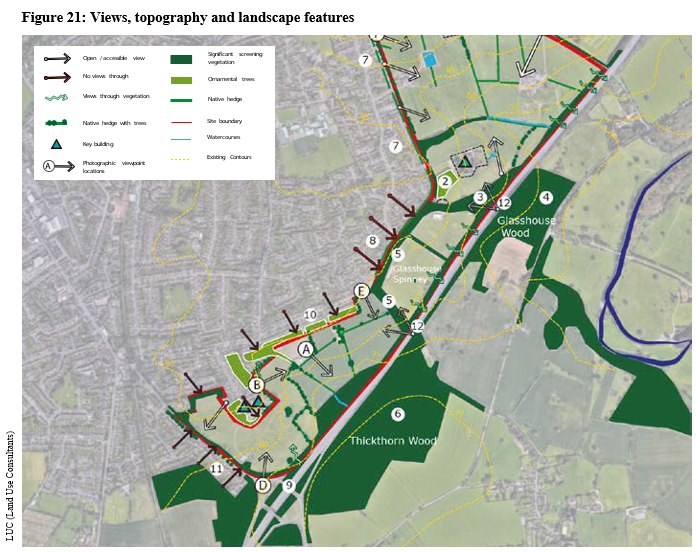 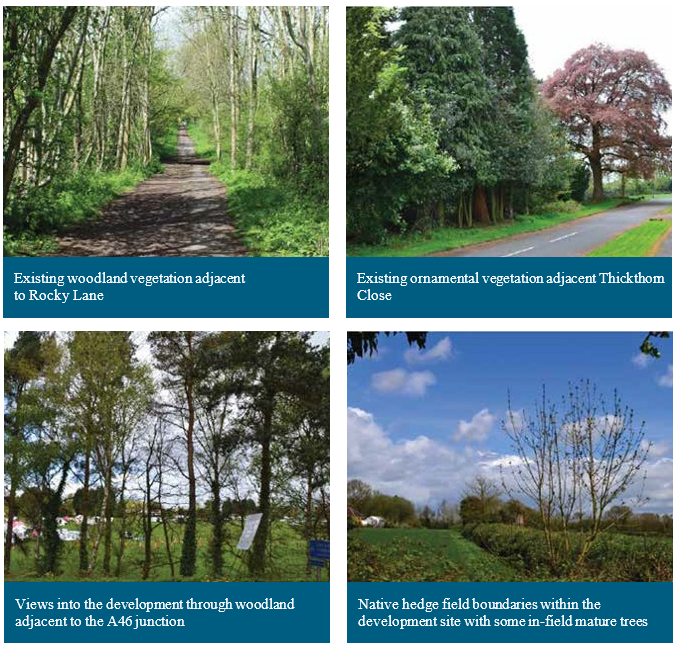 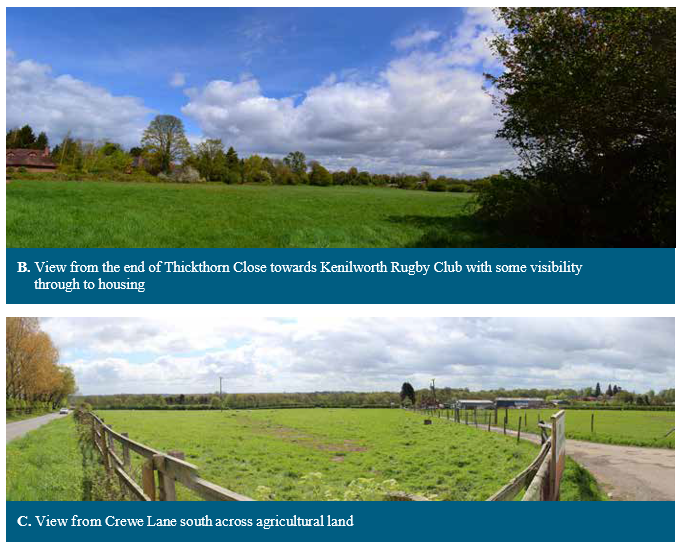 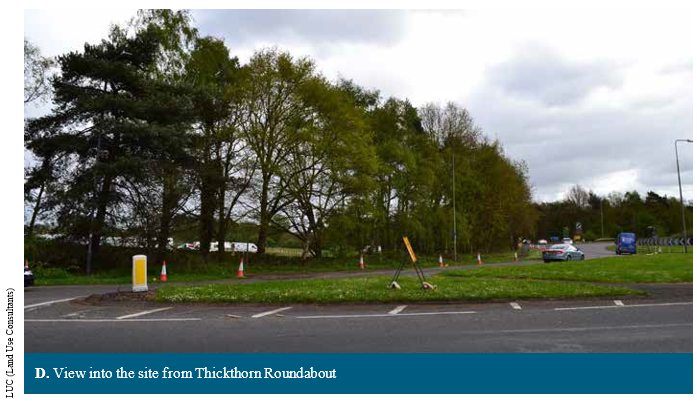 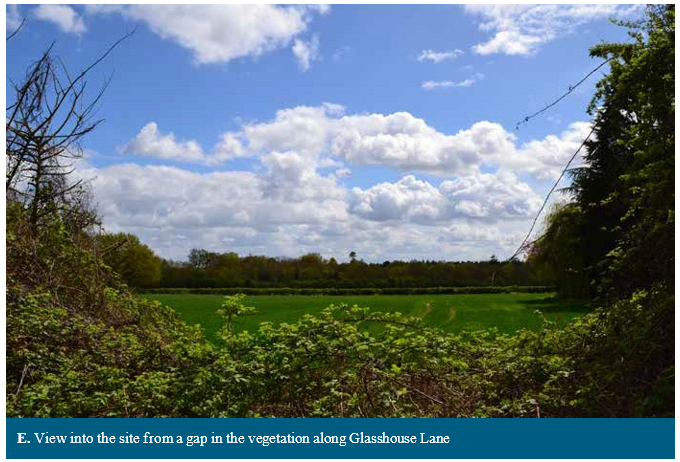 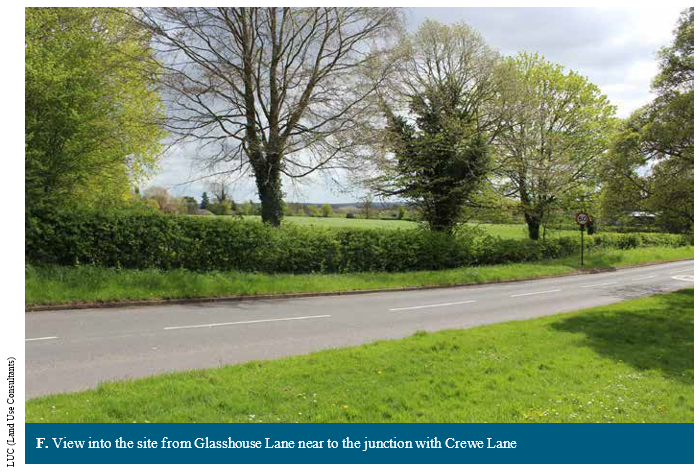 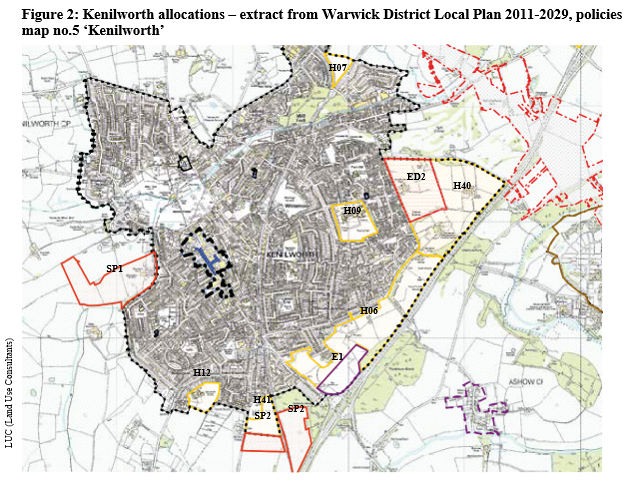 Figure 22 shows the site in the context of the immediate surrounding highway network. The site occupies land between the heavily trafficked A46 and Glasshouse Lane, a two-way carriageway subject to speeds of between 30-50 mph with a semi-rural character.

To the north Crewe Lane, a two-way country lane, abuts the site and the A452 Leamington Road adjoins the south of the site. 10 existing vehicular accesses enter the site: 2 from Crewe Lane, 7 from Glasshouse Lane and 1 from Leamington Road. 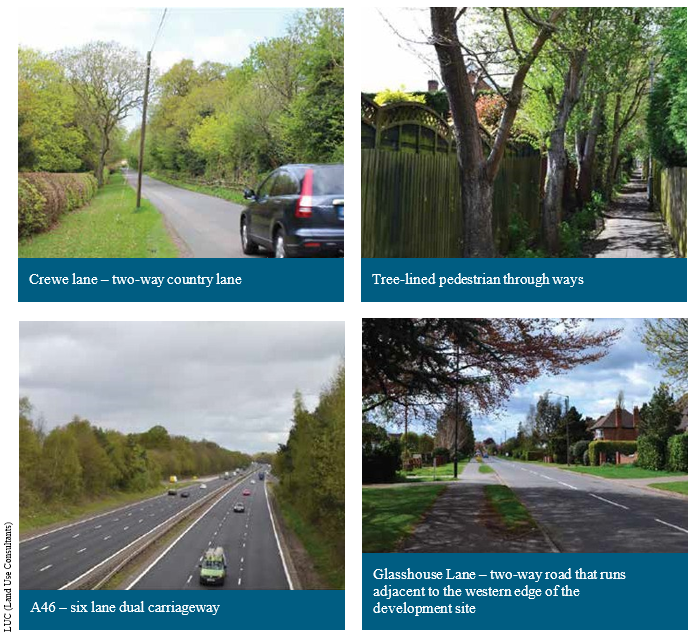 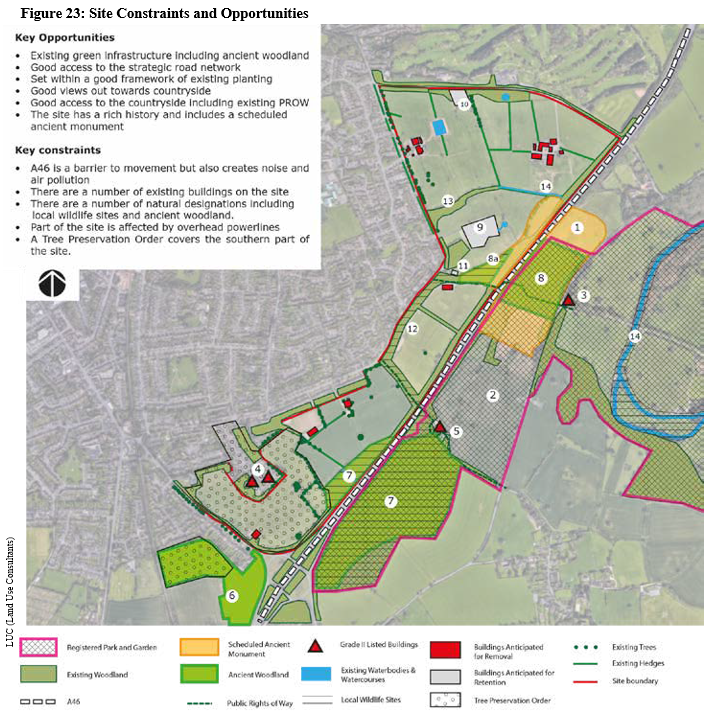 There are a number of constraints that must be considered when masterplanning and developing the site although a number of them could equally be deemed opportunities.

The site includes notable greenspaces and mature woodland including Glasshouse Spinney, Glasshouse Wood and Victoria Spinney whilst much of the perimeter of the site is also well screened by mature trees. Both Glasshouse Spinney and Thickthorn Wood are designated Local Wildlife Sites owing to their ecological value.

This existing and in part Ancient Woodland offers an opportunity to connect with new greenspace within the site to create green corridors through the site with biodiversity value and which will create attractive pedestrian and cycle routes. Furthermore, the existing tree screening will assist with minimising the visual impact of development.

Centrally located existing sports pitches provide an opportunity to be easily adaptable for usable greenspace within the development. An Orchard to the front of Woodside Hotel and other ornamental planting across the site provide further interesting features which could be integrated into development.

A couple of watercourses are present on site and the relationship of development to them must be carefully considered with regards to flood risk and drainage. However, they also have the potential to form attractive visual and educational features.

Views into and out of the site are generally limited with existing tree belts and hedgerows providing screening around much of the site perimeter. This means that there are limited key views requiring special consideration and also there is an opportunity to utilise existing planting to soften the edge of the development.

Whilst much of the site is relatively flat, in parts there is a notable slope down towards the A46 from Crewe Lane and Glasshouse Lane. This needs to be factored into the layout of development

when considering flood risks and suitable locations for sustainable drainage attenuation ponds. The topography of the site would suggest that these would be best located to the eastern edge of the site in the areas of lower ground. The underlying geology to north of site also feeds a principal aquifer and therefore development proposals in this area must acknowledge and address this where relevant.

There are no listed buildings on the site and it is not within a Conservation Area. However, Grade II listed buildings of Thickthorn Manor and its associated former stables are located to the west and north of the southern end of the site. Therefore any development will have to ensure that it respects the setting of the listed buildings and minimises any harm to the significance of the assets.

Part of a Scheduled Monument, the site of a Roman Settlement at Glasshouse Wood, lies within the site and is characterised by a wooded area and an open area. The woodland area has been used by mountain bikers/BMX riders with various jumps created and this interference with the historic asset has resulted in the site being identified on Historic England's 'At Risk Register'. The Scheduled Monument is a constraint in that no development can take place within it and any usage of it or minor intrusions must be carefully managed. The development does however offer an opportunity for improved management of the area and the addition of educational interpretation material of the history of the site to reinstate it to its natural state and ultimately remove the site from its 'At Risk' status.

Stoneleigh Abbey Grade I Listed Registered Park and Garden is situated immediately to the east of the A46 spanning much of the length of the site. Whilst the physical barrier of the A46 and mature trees to either side of the road provide a strong visual screen between the site and the Registered Park and Garden the Glasshouse Wood and Rocky Lane public footpaths provide connectivity between the two and therefore the site should acknowledge the nearby presence of this important heritage asset.

Other Grade II listed buildings are located to the eastern side of the A46 within the Registered Park and Garden although given the physical separation between the site and the buildings the development is unlikely to result in any notable impact upon them.

The heavy usage and speed of traffic on the A46 result in noise and air quality issues potentially affecting the site, in particular eastern areas. Suitable noise attenuation will be required in the form of noise bunds or acoustic fencing whilst dwellings will also have to be located away from the eastern edge of the site to combat the impact of poor air quality.

Two public rights of way run through the site, Glasshouse Wood Path (FP no.E202) and Rocky Lane (FP no.W212). The paths are constraints in that they will need to be accommodated within the proposed site layout, preferably along their existing alignment. However, they also offer good opportunities to connect the existing and the proposed development with villages of Ashow and Stoneleigh to the east of the A46 and also to the Stoneleigh Abbey Registered Park and Garden.

Currently there are no public transport routes directly serving the site and in order to create a sustainable connected community the development will need to address this.

Glasshouse Lane to the west of the site and Leamington Road to the south are both designed to a good standard capable of accommodating notable levels of traffic and thus provide opportunities for the site to connect to the existing highway network. Crewe Lane to the north however is narrow in places and has more of a country road feel and this may potentially be a constraint as a major access point to the site. However, the status of the narrower western end of the road could be reconsidered and potentially serve as a sustainable travel route.

Other constraints that will require consideration include the relationship with neighbouring buildings and land uses which primarily are in residential use. Kenilworth Golf Club is situated to the northern side of Crewe Lane and therefore the impact of development on Crewe Lane must include consideration of how this will affect the golf course.

There are currently a few on-site buildings, some of which are anticipated to be retained whilst others are proposed to be demolished to accommodate development. New development will be required to have an appropriate relationship with buildings to be retained. Where buildings are to be demolished, and across the site as a whole, due regard must be had to the historic use of that land and any contamination suitably remediated.

A number of existing utilities cross the site. Whilst developers will be expected to undertake detailed studies into utilities within their site, it appears that there are no main gas pipes within the site and only one public sewer (a 825mm diameter sewer) entering the site off Glasshouse Lane.

Recent ecology surveys undertaken by landowners highlight, as expected, that areas of the site have ecological value and are home to protected species. Detailed development proposals will need to retain habitats where possible and mitigate any impact upon ecology. The development provides an opportunity to create additional wildlife habitat and enhance biodiversity. 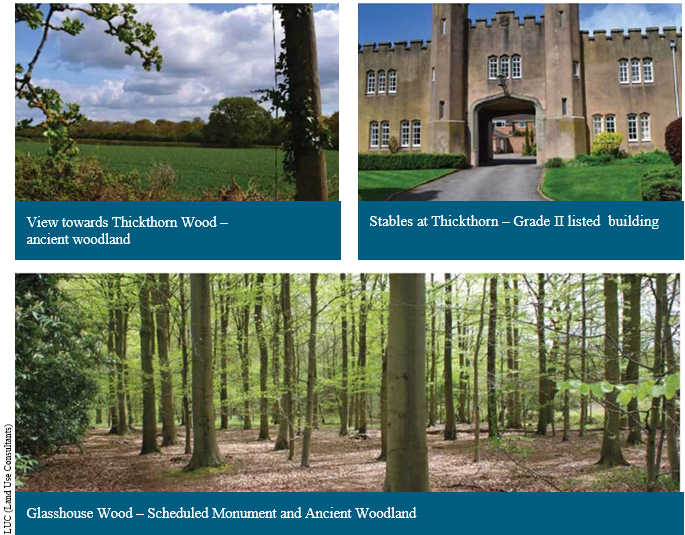