If you are having trouble using the system, please try our help guide.
BAGINTON, BUBBENHALL, STONELEIGH AND ASHOW

Baginton and Bubbenhall Parish Councils would like to express their thanks and appreciation to all those that have been involved with the development of this Neighbourhood Plan.

This Submission Neighbourhood Development Plan (NDP) for the neighbourhood area and two Parishes of Baginton and Bubbenhall has been prepared by a joint steering group on behalf of the two Parish Councils. The Plan was published for formal public consultation in Winter 2016 and the revised Submission Plan has taken into consideration the representations submitted on the Draft Plan.


As required by Government guidance, the Plan has been prepared in line with the "saved" policies of the adopted Warwick District Local Plan and the evidence base underpinning the emerging new Local Plan.  The NDP will be used to guide planning decisions up to 2029.


The Plan has a vision and objectives and a number of planning policies.


The Plan includes general planning policies which are applicable to all the areas, such as:

- supporting appropriate investment in business and employment opportunities, and


The Plan also includes more detailed planning policies relating to each of the villages, with policies addressing matters such as:


- guiding the development of proposed housing sites in Baginton, including ensuring adequate provision of affordable housing and housing which meets local needs,

- design principles for development in the villages and


Overall the Plan seeks to maintain and enhance the rural character of Baginton and Bubbenhall villages, both currently washed over by the green belt (although the emerging Local Plan proposes taking Baginton village out of the green belt), and to protect local landscape character and wildlife of the wider countryside. 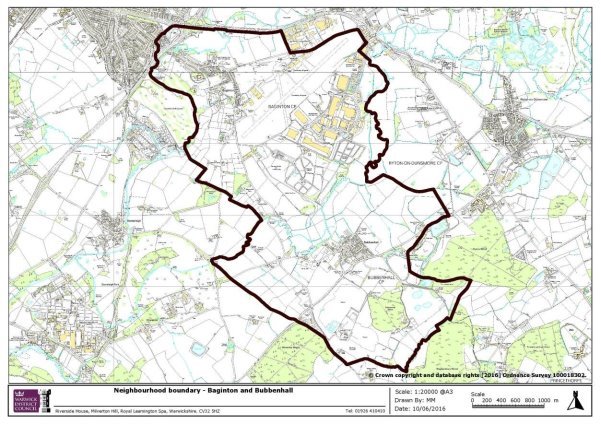 
1.2 The two Parish Councils of Baginton and Bubbenhall have decided to prepare a joint NDP for the two Parishes. A Steering Group, comprising Parish Councillors and local residents has been established to progress work on the Plan. The steps in preparing a Neighbourhood Development Plan are set out in Figure 1 below. 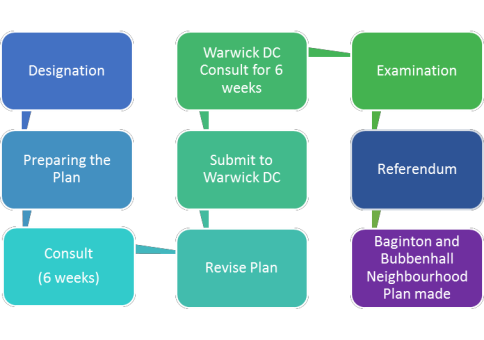 
1.4 The Draft Plan was published for Regulation 14 Public Consultation from 24th October 2016 to 19th December 2016. Further information about this is provided in the accompanying Consultation Statement. The two Parish Councils have given careful consideration to all representations and the NDP has been amended for submission to Warwick District Council. On receiving the submitted NDP and supporting documents, the local authority is responsible for checking that the submitted Neighbourhood Plan has followed the proper legal process, such as the neighbourhood area being designated and that the plan has met the legal requirements for consultation and publicity.


1.5 Warwick District Council will publish the plan and invite anyone interested to comment on it by a specified date (not less than 6 weeks from it being publicised). The local planning authority will also notify anyone referred to in the consultation statement that the plan has been received before it is subjected to an examination and then referendum. If more than 50% of those voting in the referendum vote 'yes', then the local planning authority will bring the plan into force and it will be used to help determine planning applications alongside the Warwick Local Plan and NPPF.


1.6 In line with European legislation, there is a requirement for the Plan to be subjected to a Strategic Environmental Assessment Screening Process which will determine whether a full Strategic Environmental Assessment is required. This process is iterative and may lead to amendments in the plan as it is prepared to help ensure that any adverse environmental effects resulting from policies and proposals in the plan are minimised. The Screening Assessment was undertaken on the emerging Draft Plan by Warwick District Council, who consulted with the Environment Agency, Historic England and Natural England. The Consultation Bodies agreed with the Warwick District Council Screening Determination that a full Environmental Report was not required.


1.7 A Neighbourhood Plan Steering Group was formed in 2014 consisting of representatives from each Parish. Planning Consultants were engaged to support the process and to provide expertise where it is needed. From the very start both Parish Councils and the Steering Group were determined that the Joint Neighbourhood Plan would reflect the views of those living and working in the designated area. Therefore, early versions of the Plan were informed by a questionnaire used to identify the key issues that the Plan would need to address. The Plan became a standing item on the agenda of both Parish Councils where members of the public could attend, hear an update on progress made with the plan and make comments on its content. Evidence on the local need for housing has been taken from either existing surveys or from newly commissioned housing need surveys.


1.8 Informal consultation was undertaken in both parishes during February 2016 and gave stakeholders four weeks in which to respond. Stakeholders were invited to drop in sessions where they could find out more about the plan and make their views known. A leaflet explaining the content of the plan was delivered to all households and businesses and the leaflet contained a return slip through which people could send their written comments. Returns could also be made via email and through both parish websites.


1.9 Further information about this is provided in the Consultation Statement. All comments received were carefully considered by the Steering Group and used to inform the Neighbourhood Development Plan.