(12) 1. INTRODUCTION and The Role of the Neighbourhood Development Plan

1.1.1. Neighbourhood Planning is a central government initiative introduced by the Localism Act 2011 and recognised in the National Planning Policy Framework (NPPF) reissued in February 2019. The aim of the legislation is to empower local communities to use the planning system to promote appropriate and sustainable development in their area. Neighbourhood Development Plans (NDP) must be in general conformity with the strategic policies of the host authorities Development Plan, which is the Warwick Districts Local Plan (WDLP), and have regard to national policy and guidance.

1.1.2. In 2014 Burton Green Parish Council (BGPC) published its Burton Green Parish Plan 'Planning for the future'. The aim of the document was to ''...provide a resource to share the views of Burton Green residents and put in place plans that will enhance the Parish,'' and also provides additional community data.

1.1.3. BGPC determined in 2017 that the village would benefit from proceeding to the production of a full NDP, conforming to the above NPPF and associated procedures. BGPC established the Neighbourhood Development Plan Steering Group (NDPSG) made up of Parish Councillors and local resident volunteers. Appendix 1 sets out the steering group constitution. The NPSG was charged to undertake the necessary research, community consultation and document preparation. The resultant draft would be delivered to BGPC, as the qualifying body who would manage the completion, formal public consultation and submission process.

1.1.4. An important factor in the timing of this plan was the availability of the Warwick District Council Local Plan (WDLP) which defines the planning context for Burton Green. The WDLP was adopted in 2017 but runs from 2011 - 2029. This NDP must be in general conformity with the strategic policies of the WDLP

1.1.5. Once made, this NDP will form part of the Development Strategy for the district alongside the WDLP. 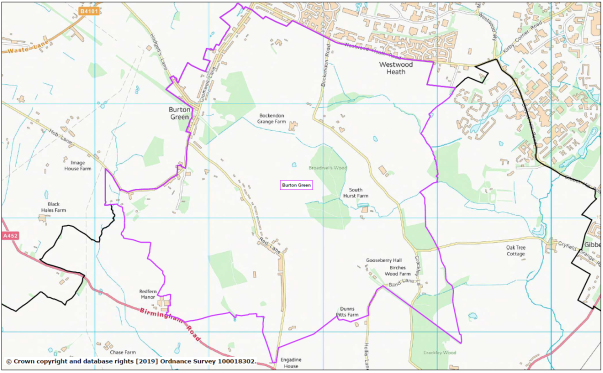 1.2.1. Though the plan period runs concurrently with the WDLP, national and local planning policy is fluid and changes over time. Similarly, the evidence base underpinning this NDP can and will change over time. BGPC therefore commits to regularly monitor changes in national and local policy and the way in which the NDP is implemented in planning decisions in the NDP Area. A review of the NDP will be carried out at 5-year intervals.

1.2.2. This document comprises the NDP. The associated Evidence and Reasoning Document (ERD) records the evidence and reasoning for the policies and allocations contained in the policy. The ERD document contains all the references and hyperlinks to the surveys and analysis providing the evidence base, as well as the planning context of this NDP.

1.2.3. Selected other documents are referenced directly to form this NDP, because of their significance and frequency. These use the following abbreviations:

1.2.4. This NDP has been prepared by the community for the community. This document is the product of an intensive programme of consultation and community events. Each stage of the project has evolved from the needs and desires of the Burton Green community.

1.2.5. The NDP project has been led by the NPSG. Details of its constitution are recorded in Appendix 1.

1.2.6. The NDPSG has been heartened by the number of people who have engaged with the project to develop the NDP, through active participation in the Steering Group, completing survey questionnaires, participating in community consultation events and delivering and collecting survey envelopes. At least 312 people have been involved.

1.2.7. The quarterly newsletter 'Burton Green Bugle' published by the Burton Green Residents Association and delivered to every household in the village has been used to inform the community of the progress of the NDP and forthcoming activity. All the NPDSG meeting summaries are published on the BGPC web-site as are the resident survey and housing needs survey reports. NDPSG also uses the Community email loop and the Burton Green blog to alert the community to forthcoming activity in relation to the NDP process.

1.2.8. Information and consultation events have been included in village events at the Village Hall. The Parish Council agenda includes an item relating to NDPSG meetings and activities and public representation and views can be sought at PC meetings.

1.2.10. In May 2018 the Burton Green Neighbourhood Development Plan Residents Survey (BGRS) was undertaken, with questionnaires (total of 380) delivered to every household in the village by volunteers.

1.2.11. The questionnaires (in sealed envelopes) were collected by the volunteers after 24 May up to the middle of June. 312 resident questionnaires were received, a response rate of 82%, and passed on for analysis by Stratford District Council (SDC), The BGRS report from SDC was delivered to BGPC in July 2018, formally adopted by BGPC and posted on the BGPC website.

1.2.12. At the same time as the Residents Survey questionnaires were delivered a Burton Green Parish Housing Needs Survey 2018 (HNS) was also distributed. Warwick Rural Community Council (WRCC) devised, printed and analysed the HNS and presented their report to BGPC in July 2018 which was accepted by BGPC and posted on the BGPC website.

1.3.1. Community projects describe projects which reflect the aspirations of the community and which the community would like to undertake during the period of this NDP.

1.3.2. They are shown in this NDP in blue highlighted boxes, in close association with those policies which enable or facilitate them.

1.3.3. Initiatives to undertake further community projects from appropriate community groups will be welcomed. BGPC will facilitate, co-ordinate and (where appropriate) fund the project including the use of Community Infrastructure Levy (CIL) monies.