About these proposed modifications

The proposed modifications to the Publication Draft shown in the table below have been prepared in February 2016 to specifically address the issues of soundness identified by the Inspector set out in his letter of 1st June 2015. The proposed modifications are based on the text of the Publication Draft Local Plan published in April 2014 as amended by the Focused Consultation published in October 2014.

A number of other amendments have been proposed in response to the consultations undertaken in May/June 2014 and November/December 2014. These have been shown in full in submission documents LP23 and LP23a. However, these amendments have not yet been subject to consultation and do not form part of current considerations. It is anticipated, subject to the agreement of the Local Plan Inspector, that any of these amendments that are substantive in nature, will form part of a future consultation following Examination hearings prior to finalising and adopting the Local Plan.

Note: In the table below,

existing text to be deleted is shown as follows: DELETED:

The following sites, as shown on the Policies Map, will be allocated for housing development and associated infrastructure and uses:

* to be brought forward in accordance with Policy DS12

** to be brought forward in accordance with Policy DS New1

*** to be brought forward in accordance with Policy DS New3

2.41 All sites were initially assessed for their suitability for housing in the Strategic Housing Land Availability Assessment. Sites were then appraised using the Council's Site Selection Methodology INSERTED: /Matrix which considered the suitability of each site against the following information:

2.42 Sites were also assessed against the INSERTED: spatial strategy including the potential to lead to a coalescence of settlements and the loss of employment land. A figure for the number of dwellings for each site is shown, however it is recognised that this may vary dependant on detailed planning at the application stage. In most cases this figure will represent the minimum site capacity

2.43 A number of brownfield sites will become available as a result of the rationalisation or replacement of public sector land and services. The two Kenilworth School sites INSERTED: and Riverside House DELETED: and Leamington Fire Station will become available when alternative premises have been provided for the existing users. DELETED: The land at Montague Road is available in part and capable of being developed in phases.

2.44 DELETED: Land at Station Approach is partly vacant and the site is being brought forward by a Joint Venture between the Council and a Housing Provider with grant funding from the Homes and Communities Agency. The Council is DELETED: also proactively bringing forward INSERTED: part of the site at Court Street INSERTED: that does not yet have planning permission. Land at Myton School is being made available as part of the proposals to reconfigure and expand this school. The land has potential to help fund the school expansion

INSERTED: 2.45 The Soans site INSERTED: and the site at Station Approach have been assembled DELETED: is currently being assembled for housing development utilising an area where vacancy rates in existing industrial premises are high. INSERTED: These sites gained planning permission for 147 dwellings and 212 dwellings respectively in 2015 DELETED:. The site forms part of a wider area that has potential to deliver canalside regeneration through the support of policy DS14. Opus 40 has also received planning permission during 2015 for 85 dwellings.

INSERTED: 2.46 The site of the former sewage works is set back from Harbury Lane and is sandwiched between the sites at Grove Farm and Heathcote Farm. Thus the site, which requires extensive remediation, cannot come forward until a suitable access from an adjoining site is made available.

INSERTED: 2.49 The strategic urban extension to the south of Warwick and Leamington comprises of land to the west of Europa Way and land to the south of Harbury Lane. INSERTED: In addition to the sections that are brownfield sites, this area will deliver 2920 dwellings. With the exception of a small section to the south of Harbury Lane (capacity for 105) and a small area west of Europa Way (capacity 50 dwellings), this whole area has been granted planning permission during 2014 and 2015. In addition to the housing, DELETED: T INSERTED: the area will deliver DELETED: up to 2,957 homes along with extended secondary school facilities, three primary schools, DELETED: employment land, local GP services, shops, community facilities and an important buffer of open space to the south to be delivered as a Country Park.

INSERTED: 2.50 The site at Whitnash East provides an extension to the committed site located off St. Fremunds Way, to the south of Sydenham. The site will deliver up to DELETED: 300 INSERTED: 500 homes along with an ecology and landscape corridor adjacent to Whitnash Brook and a partial rebuild and extension of Campion School which will enable access to be provided.

INSERTED: 2.51 Land at Red House Farm forms an extension to Lillington, one of the most deprived neighbourhoods in Warwickshire. The urban extension will provide for up to 250 new homes, of different types and tenures, and support regeneration in Lillington itself.

INSERTED: 2.52 The strategic urban extensions to the east of Kenilworth, at Thickthor INSERTED :n, Woodside Training Centre and Crewe Gardens DELETED: n, will provide for up to DELETED: 760 INSERTED: 1400 new homes and 8 hectares of employment land. Kenilworth has seen relatively little new development in the last 20 years and the new housing which has been provided has been largely at the expense of employment land. This development, therefore, provides the opportunity to deliver new housing and employment in a sustainable location along with the necessary supporting facilities of a primary school, local centre and open space. In order to ensure the delivery of housing and associated uses in Kenilworth, the Council will consider the use of its Compulsory Purchase Powers. DELETED: Later in the plan period a A new secondary school will be provided on land to the north at Southcrest Farm. A further 9 DELETED: 0 INSERTED: 3 homes INSERTED: now have planning permission DELETED: will be provided on a site to the north of the town at Crackley.

2.53 To the north of Milverton, land for 250 dwellings has been identified with the potential to also include a park and ride and a small amount of employment land. In addition to this allocation, a further area of land has been removed from the Green Belt and safeguarded for the remainder of the plan period

2.54 At Westwood Heath, land has been identified for a residential-led, mixed-use development. Given infrastructure constraints, especially along the strategic and local highways network, the housing to be provided on site is capped at 425 dwellings during the current plan period. However, the creation of improved road infrastructure / additional network capacity could allow for further residential development to be accommodated without undue adverse impacts on local amenity on land that has been safeguarded adjacent to the allocated site.

2.55 At Kings Hill an area of 269ha has been identified for a residential-led, mixed-use development. The site has an overall capacity of c. 4,000 dwellings, with c. 1,800 dwellings being deliverable by the end of the current plan period. The mixed use development will also deliver opportunities for employment provision. Land will be made available for open space, leisure and amenity uses and a green infrastructure network will link to the wider countryside and north to the conurbation. A local centre will be provided at an appropriate scale, incorporating a range of local community facilities and services including meeting space / community buildings, emergency services infrastructure, youth facilities / play areas and local retail provision for convenience shopping. A new primary school will be required to serve the development, which may need to be expanded as the site develops over time.

INSERTED: 2.56 The majority of the village housing allocations are located on the edge of the existing limits to the built up areas of the village in locations which will provide natural extensions, DELETED: Large sites of over 50 dwellings will be brought forward in phases (see Policy H10) so that the growth of the village can take place more slowly and in proportion to the size of the settlement. This will provide a greater opportunity for the new communities to integrate into the life of the village and for housing to meet local needs which will change over the lifetime of the Plan. 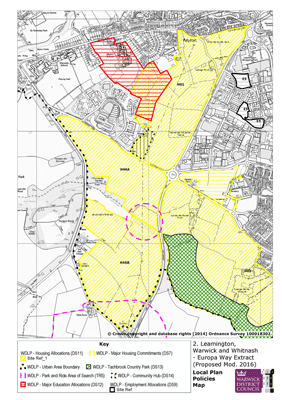 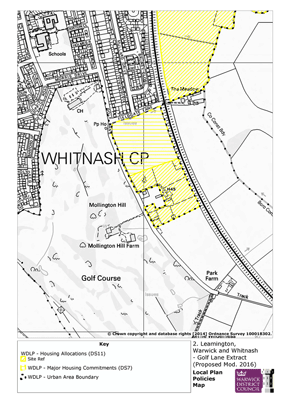 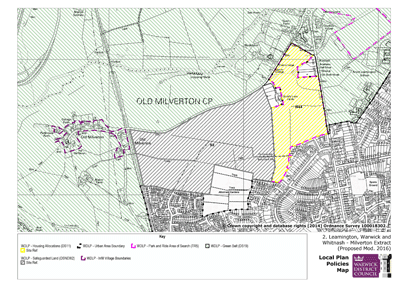 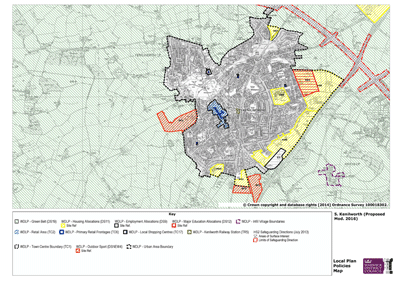 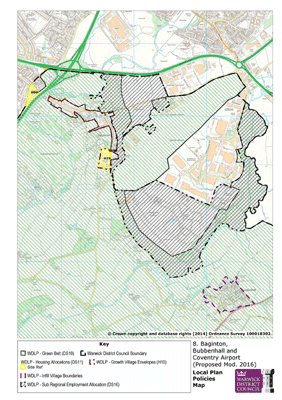 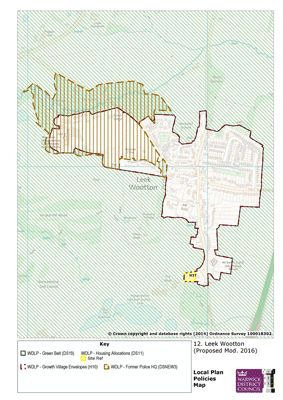 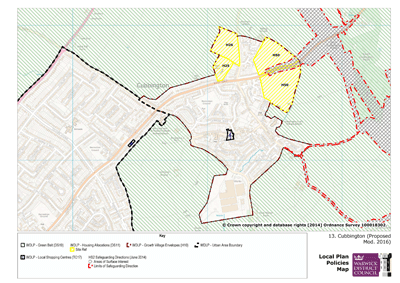 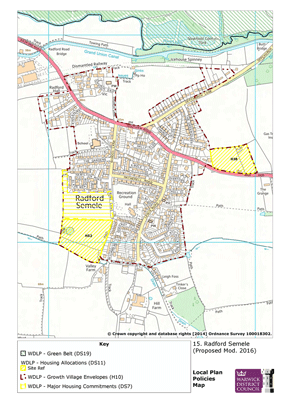 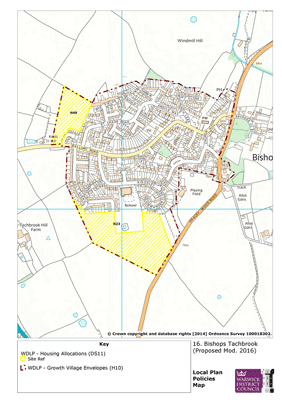 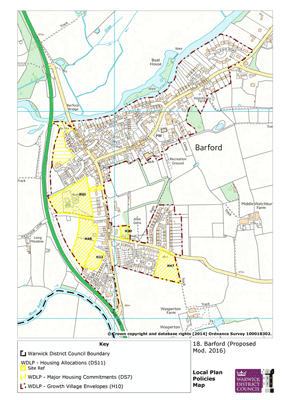 ModPM20 - Hampton Magna and Hampton on the Hill 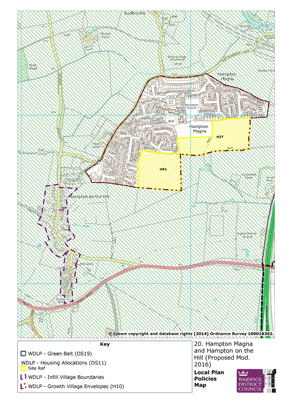 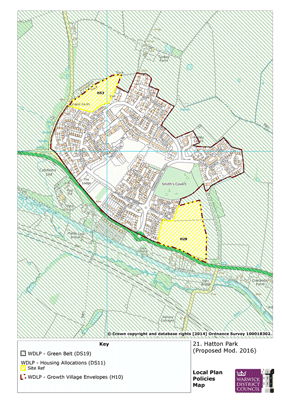 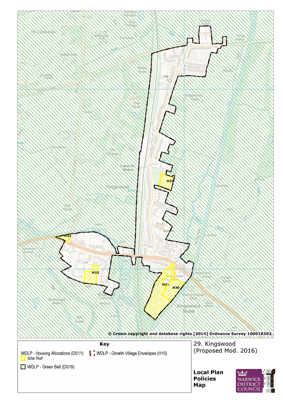 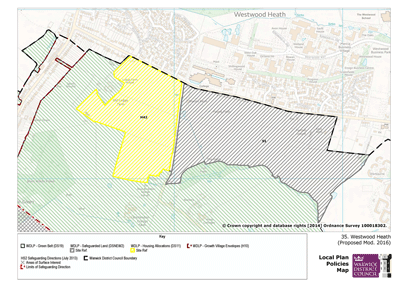 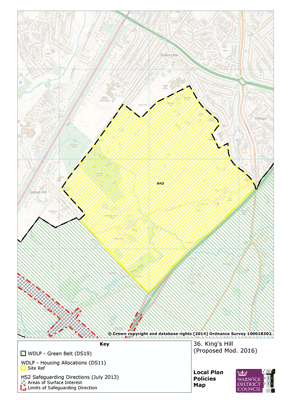 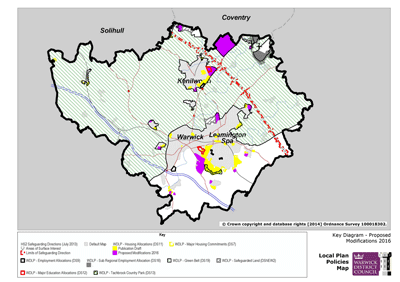