1.1 Kenilworth Town Council has prepared a Neighbourhood Plan for the whole of its area, which was designated in August 2015 by the local planning authority, Warwick District Council, under the provisions of the Localism Act 2011 and of the Neighbourhood Planning (General) Regulations 2012. The designated area shown in Map1.1 below. 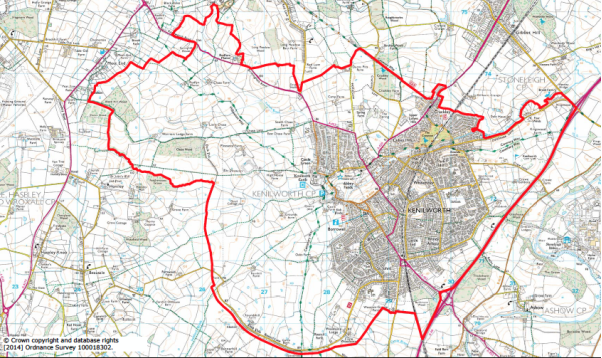 1.2 The Neighbourhood Plan covers the period April 2011 to March 2029, which coincides with the plan period of the new Warwick District Local Plan adopted in September 2017. Once the Neighbourhood Plan is made, its policies and those of the Local Plan affecting Kenilworth will be applied as appropriate to help determine all planning applications in the town.

1.3 In preparing the Neighbourhood Plan, the Town Council has therefore been very mindful of the proposals for Kenilworth in the Local Plan to make sure that the two plans are entirely complementary. It decided to convert its existing Action Plan into the early part of the Neighbourhood Plan in order to influence and manage the integration of those planned developments into the town. The policies aim to positively plan for the growth of the town's housing, town centre, businesses and community facilities, but to do it in ways that will protect its special character.

1.4 Neighbourhood plans can only contain land use planning policies. This often means that there may be important issues of interest to the local community which cannot be addressed in a Plan as they are not directly related to planning.

1.5 Although there is considerable scope for the local community decide on its planning policies, Neighbourhood Plans must meet some 'basic conditions'. A separate Basic Conditions Statement is published alongside this Plan, which sets out how those conditions have been met. In essence, the conditions are:

1.6 In respect of the last of these conditions, the Town Council received a screening opinion from the District Council, which established there would be no need for the Plan to be accompanied by a Strategic Environmental Assessment under the EU Directives 42/2001 and the 2004 Environmental Assessment of Plans and Programmes Regulations. However, an appraisal of the ways in which the Plan will contribute to the achievement of sustainable development will be included in the Basic Conditions Statement.

1.7 In addition, the Town Council must be able to show that it has properly consulted local people and other relevant organisations during the process of making its Neighbourhood Plans and has followed the 2012 Neighbourhood Planning Regulations. It has demonstrated this in its separate Consultation Statement, that is also published alongside this Plan. It includes information on the statutory consultation exercise from May – August 2017 on the draft Plan.

1.8 The Neighbourhood Plan and these statements will now be tested by an independent examiner. If satisfied, the examiner will recommend that the plan goes to a referendum of the local electorate. If a simple majority of the turnout votes for the Plan, then it becomes 'made' as formal planning policy for the area.