The site is not in the Green Belt. It is part of a farm complex and would take access from a new point along the Fosse Way. The Fosse Way is a popular route with the travelling community and the site is ideally located for this reason. It lies wholly within Flood Zone 1 which is sequentially preferable. The land is Grade 3 and 3a agricultural land. It is adjacent to Parlour Spinney which is a potential Local Wildlife Site. Although unable to connect to the public foul mains sewer, a non-mains solution could be provided. Radford Semele is the closest school to the site (1.5 miles) and Harbury school is at 1.7 miles. GP surgeries are located at Croft, Sydenham (2.6 miles) or Harbury (1.6 miles). There are 63/64 and 498 bus services along A425. The landowner is not willing to sell this site, so compulsory purchase powers would have to be used to bring the site forward.

This site is not in the Green Belt. It is unlikely that the site could be connected to the public foul mains sewer so would need a non-mains solution. It lies wholly within low risk Flood Zone 1 and is sequentially preferable in terms of flood risk. The land is Grade 3 agricultural land.

Access is feasible if created northwest of Tachbrook Hill Farm access, but should be in advance of traffic calming features. Bishop’s Tachbrook School is the closest to the site (0.9 miles). Children living on this site would secure places over children at a greater distance. There are also three new schools proposed as part of the allocated development sites in the Draft Local Plan and these will also serve this area. A GP surgery is located at Bishops Tachbrook one mile away. The 77 bus service passes the site. The landowner is not willing to sell this site, so compulsory purchase powers would have to be used to bring the site forward.

The site is not in the Green Belt. Along the edge of the river bank the land lies in flood zones 2 and 3, however this does not impinge on the land which the development would occupy. The site is close to services and facilities at Barford village although this does mean crossing the by-pass to access them. There are however footpaths along the roadside. It is close to the primary road network at Longbridge giving access to the M40 and A46 and linking to other major roads across the region. Access can be achieved by utilising the existing access points of which there are two, by widening the visibility splays. The site is within two ownerships: Warwickshire County Council being one and a private landowner the other. Although WCC may be amenable to transferring ownership of its part of the site, the private landowner is not willing to sell this site, so compulsory purchase powers would have to be used to bring the site forward. The priority area school, Barford St Peter’s, is 0.8 miles from the site. Some places at the school are taken by out of area children but children within the priority area will take precedence and if new development raises the local numbers substantially, the school may need to be extended in the longer term. There is a GP surgery located in Bishop’s Tachbrook (2.6 miles) or Hampton Magna (2.9 miles) . There are two bus stops within the recommended walking distance of 800m for the 18 and 18a bus service. 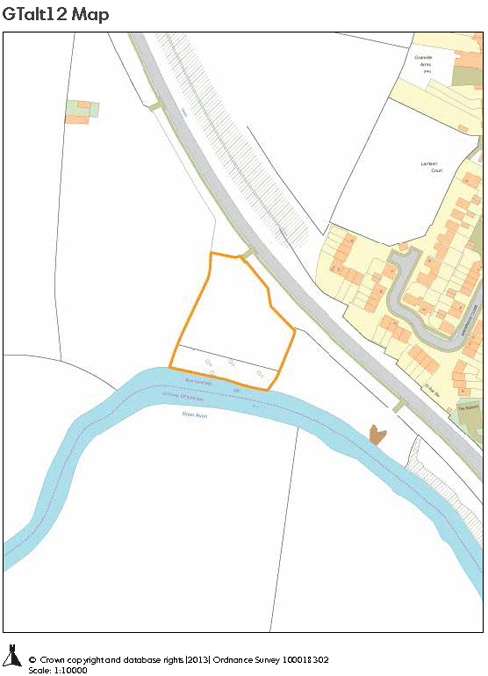 This site is not in the Green Belt. Use of just a central section of the site for this use may cause problems for a viable agricultural unit as it dissects fields. It is in close proximity to the Grade 1 Listed Park and Garden at Castle Park. There should not be development close to Banbury Road therefore that gives the area a more urban feel and appearance. There are unknown contamination issues relating to a former landfill site on western third of site which reduces the developable area. There may also be noise issues connected with proximity to Warwick By-Pass depending on where exactly the site is located. The site lies within Flood Zone 1 and is therefore sequentially preferable. There is however an ordinary watercourse running through the centre of the site and along the eastern boundary for which no modelling has been undertaken. This could affect the capacity of the site for development and therefore further assessment needs to be undertaken prior to allocation. Regardless of floodplain extent, the watercourse and ponds must be protected and buffered from development. It is unlikely that the site could be connected to the public foul mains sewer so would need a nonmains solution. A new access should be achievable north of Park Farm. There are a number of school places in Leamington at Kingsway Primary. A GP surgery is located at Bishops Tachbrook (1.4 miles). Public transport is provided by the 68 bus service (0.9 miles). The landowner is not willing to sell this site, so compulsory purchase powers would have to be used to bring the site forward. 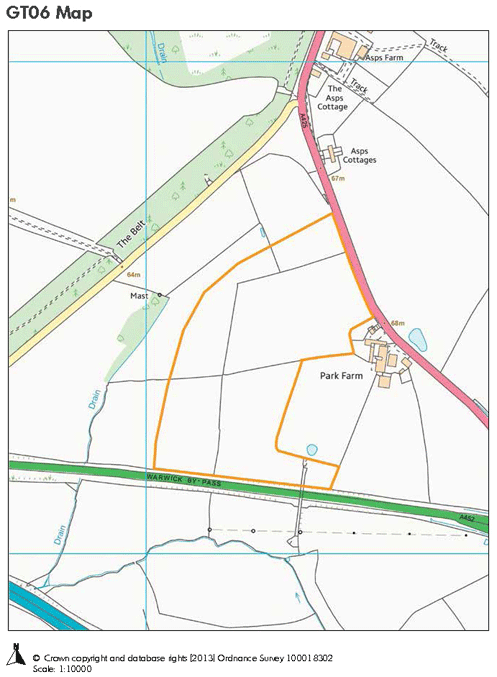 This site is in the Green Belt, but previously developed having been used possibly as a quarry later filled and now as a road salt store by Warwickshire County Council which leases the land from the current owners. There are potential contaminants from both former uses, but these are currently unknown. There is a potential impact on local wildlife with reports of protected species having been seen on the site. The site is wholly within Flood Zone 1 and therefore sequentially preferable. This land is within 1000m of HS2 and there is no advice as yet as to how far residential property should be located from the line to prevent noise issues. Located on sandstone an additional assessment is required to ensure that there would be no risk to groundwater. Access should be achievable with the required visibility splays. Although Grade 2 agricultural land, the contamination issues make this land unsuitable for agricultural use in the short term. The site is more remote than some but within easy reach of the edge of Leamington and Cubbington in particular. The priority area school would be Cubbington which is usually full or close to capacity. Travellers looking for places this year would take priority over out of area children and so would be likely to secure places. There is also a Catholic School in Cubbington which has some spare capacity. There is a GP surgery at Rugby Road (1.3 miles) and public transport is provided by the 67 bus service (1126m) and 538 bus service (irregular – 1287m). The landowners are not willing to sell this site, so compulsory purchase powers would have to be used to bring the site forward. 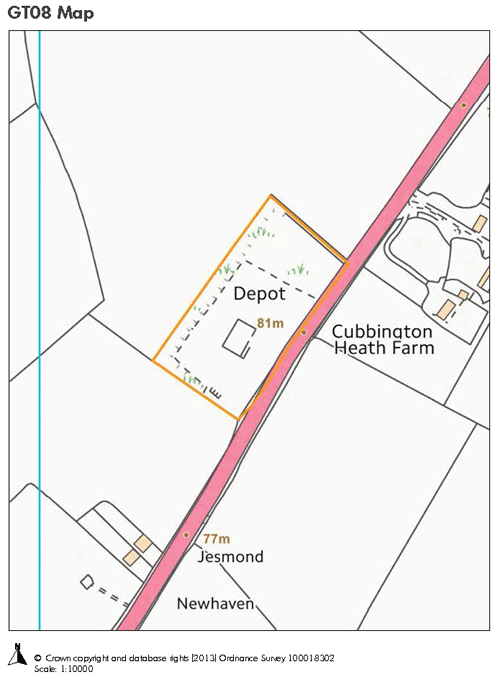 The site is not in the Green Belt. The Gog Brook has been modelled so there is confidence over the extent of floodplain and the site would be located to avoid it. There is however, uncertainty over the impact on the racecourse and Budbrooke Lodge, which is a private residence. The site includes the Gog Brook Local Wildlife Site. It would be immediately adjacent to local services and facilities at Chase Meadow on the edge of the urban area with easy access to Warwick and the facilities afforded by the town. The site is also well located for access to the primary road network. Good pedestrian access links the site with Chase Meadow and Warwick. Whilst vehicular access may be achievable the Budbrooke Lodge access is preferred by the highway authority and this may not be available. It may be possible to connect to main sewers serving Chase Meadow. Children would apply for places at Woodloes Primary school as other closer schools are likely to be full, although new Local Plan housing allocations will deliver three new schools in the area and children will fall within one of these catchment areas. There is a GP surgery at Chase Meadow (0.5 miles) and public transport is provided by the 68 bus service which passes the site. 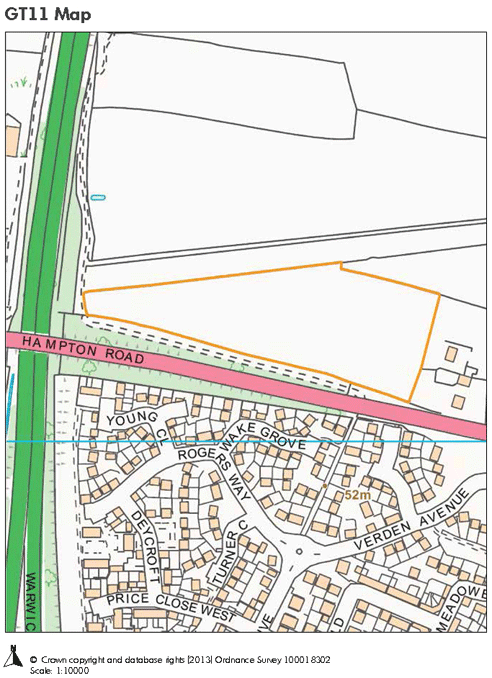 The site is in the Green Belt but is currently used as a timber yard and therefore previously developed land. The site is situated on Rugby Road with North Cubbington Wood behind. This is replanted ancient woodland. There is some surface water flooding on a small area in south east corner, but this could easily be avoided. The site is more remote from services and facilities. The existing access is likely to be suitable to serve the site, but visibility splays may not be achievable and intensified use of site may be detrimental to public highway safety. A speed survey would be required if progressing this site. The landowner considers it unlikely to be a viable proposition as the purchase of North Cubbington Wood as well as timber yard business would be necessary. North Cubbington Wood is one of the prime cases for woodland restoration for the Princethorpe project which is a complex of woods and hedgerows, currently a Warwickshire Wildlife Trust Living landscape project funded by SITA Trust. The priority area school would be Cubbington which is usually full or close to capacity, however, Travellers looking for places in September would take priority over out of area children and so would be likely to secure places. There is also a Catholic School in Cubbington which has some spare capacity. There are no bus stops within the maximum recommended walking distance of 800m.

This site is in the Green Belt and is not previously developed land. Access is achievable along Hampton Road with the required visibility splays. There is also pedestrian access to this site. The Priority area school would be Budbrooke Primary School which is usually full or close to capacity however, children looking to enter in September would take priority over out of area children. Numbers within the Budbrooke priority area are falling so more places could become available. The school does currently take children from Warwick which is out of its catchment area. A bid has been made for funding to expand this school based on the knowledge that there could be more ‘in area’ children in the future when new village housing is developed. The site is on a public transport route with two bus stops within recommended walking distance of 800m (68 bus service). A GP surgery is located at Hampton Magna (1.1 miles). The landowner is very keen to the promote site for this use making it available and deliverable. 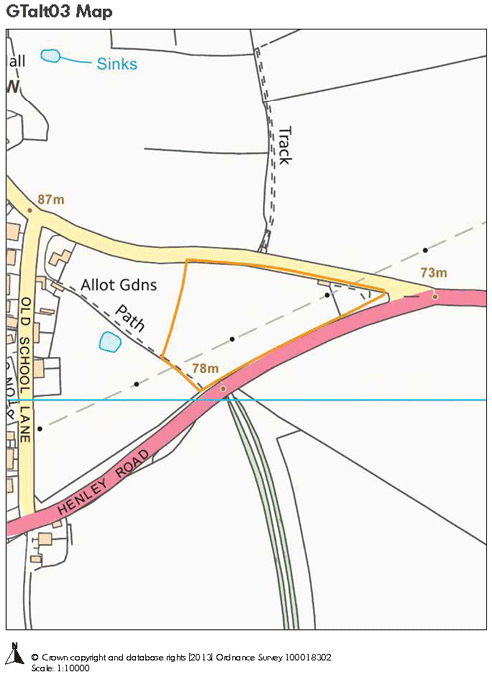