4.1 Consultation on the various growth levels for the villages started with the Local Plan Preferred Options Report in 2012. This was updated in June 2013 with the publication of the Local Plan Revised Development Strategy and new information on a revised Settlement Hierarchy for the Villages. This section now focuses upon the key headlines from the consultation feedback received during the most recent consultation process. A summary of the key consultation findings are also included in Appendix 4.

4.2 As part of the overall feedback on the villages a number of comments were received questioning the rationale for including the villages in the forward growth agenda for the District. There have been a number of comments about the need to focus upon using brownfield sites first, using empty properties upfront rather than building new developments and consider reducing the housing requirements for the villages if the overall housing requirement for the District was lowered. Furthermore, consultation comments were also received suggesting that there are no clear exceptional circumstances for releasing Green Belt land around the villages for development and there was a potential risk of coalescence between settlements. Certain village locations were not perceived to be particularly sustainable locations to concentrate development, and may encourage further private car use and put excessive pressure on local services and facilities. In addition, some of the scoring and weighting of variables in the settlement hierarchy research was also questioned.

4.3 It is clear that focusing development in a limited range of village locations is part of a broader WDC strategy to enable more sustainable growth where there are suitable services and facilities and also good access (often by public transport) to larger urban areas for a wider range of services and indeed employment opportunities. We have seen in the rural parishes and villages in the District that the populations are changing – ageing considerably in some villages and losing younger residents. This brings particular challenges to sustaining and importantly enhancing village services and facilities.

4.4 Accommodating a limited level of sensitively managed growth in some of the District’s more sustainable village locations provides an opportunity to potentially re-balance local housing stock biases, provide housing for parishioners in need of homes captured through local housing needs surveys, and scope to accommodate some of the wider District housing requirements. With new housing comes the positive benefits of:

Some of these advantages were also highlighted in the community consultation feedback.

4.5 It is clear from a review of the consultation comments on specific villages that there are a number of shared themes emerging, particularly relating to the scale of potential village developments and their environmental and character impact. These themes are captured in the figure illustrated below. 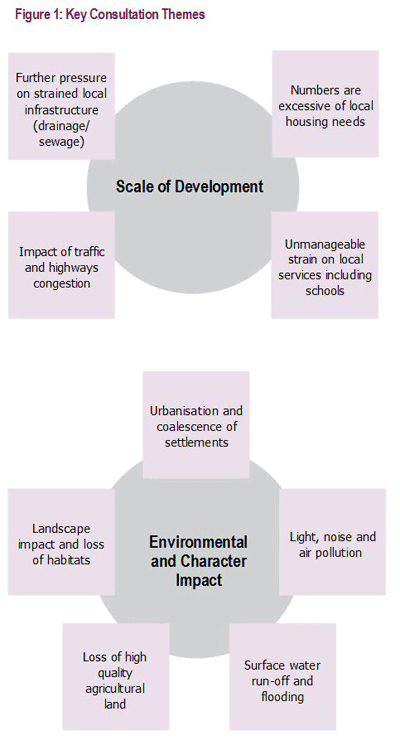 4.6 One of the key sub-themes regarding the scale of development relates to the number of houses proposed for various village locations which was perceived as completely out of scale to the local housing requirements as indicated through parish planning and housing needs surveys. In response, there are two main issues here:

4.7 There are a wide range of issues relating to pressures on infrastructure (drainage / sewage); traffic impact and congestion, and local services highlighted in the consultation feedback. The level of growth forecast in the Revised Development Strategy was subject to a strategic review of pressures on primary schools and highways. From this review it was felt that the level of development proposed could be accommodated, albeit that it would depend upon more specific development proposals.

4.8 As part of the detailed site assessment work, information has been included in the site selection appraisal process, which includes a review of site infrastructure requirements (drainage / sewage issues); flooding and surface water issues; vehicle access requirements and physical site constraints and impact, amongst others. A Sustainability Appraisal also accompanies this report, which looks strategically at a range of infrastructure issues for each village settlement.

4.9 It is understandable that there are community concerns over the potential environmental and character impact of new development in the villages. This has also been a key concern of WDC. Prior to establishing a list of preferred housing options, detailed work has been undertaken on landscape impact and habitat survey work, reviewing the function of Green Belt and Green Field land parcels surrounding the villages, as well as reviewing core environmental health issues such as noise pollution and land contamination. It was noted above that a detailed assessment has also been undertaken reviewing current and potential flooding issues.

4.10 Following the outcomes of the detailed site assessment work, this has had a substantial impact in some village locations, reducing the number of suitable housing options. The implication of this work is a reduction in the total number for village housing. This is down from about 1000 dwellings across the originally identified 10 settlements (Revised Development Strategy figure) to approximately 835 for the same settlements. This reduction in figures primarily reflects environmental and access restrictions to a number of sites. This figure is similar to the level of growth indicated at the Preferred Options stage of the Local Plan. In line with community concerns about the coalescence of settlements, this has also been another key consideration regarding the suitability of sites both within Green Belt and non-Green Belt locations. A number of sites have been rejected based on this factor, as well as other concerns.

4.11 Appendix 4 also provides a statistical summary of the representation received, which relate to the 10 primary and secondary service villages outlined in the Revised Development Strategy. By far the highest number of representations received objecting to development, were for Hampton Magna. However, it should be noted that the planning system does not place weight on the quantity of responses received in relation to a site or an issue, but rather gives weight to the strength of the arguments put forward.

4.12 In addition to the Local Plan consultation stages, discussions have been on-going with Parish Councils over the last 12 months. Some of the key feedback on the various housing sites options is outlined in Appendix 5 to this report, which forms part of the site selection methodology.